By velocityglobalSeptember 8, 2016September 23rd, 2022No Comments Denver, CO (September 1, 2016) — Velocity Global is one of about 100 U.S. companies and organizations heading to Latin America for the U.S. Department of Commerce-led Trade Winds—Latin America trade mission and business forum.

“The United States exported nearly $273 billion in goods in 2015 to the markets we’re visiting at Trade Winds,” said U.S. Assistant Secretary of Commerce for Global Markets and Director General of the U.S. and Foreign Commercial Service Arun Kumar. “The companies and organizations participating in Trade Winds will connect to the most promising business opportunities in the region, and we are proud to have such a strong delegation.”

Velocity Global is participating in the business forum in Chile and mission stop(s) in Argentina, Uruguay, and Bolivia.

Velocity Global is a Global Employment Solutions provider that is reinventing the way companies do business overseas. Whether you are hiring local nationals, converting overseas contractors to employees, or sending expatriates into a market; our solution reduces costs by as much as 60%, reduces hire time by up to 90%, produces timely and accurate payroll, complies with foreign laws and benefits, and keeps you focused on running your business. With capabilities across over 185 countries, they’ve got you covered.

“Latin America is one of the strongest regions for our company and the clients we support; it is increasingly important given recent disruptions in the Eurozone and Brexit fallout,” said Ben Wright, CEO of Velocity Global. “Our involvement with the 2016 Trade Winds program demonstrates our further commitment to the region, specifically helping companies enter these markets in record time and at lower costs than previously possible.” 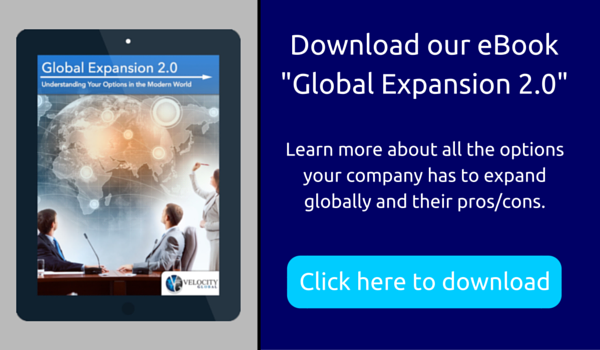